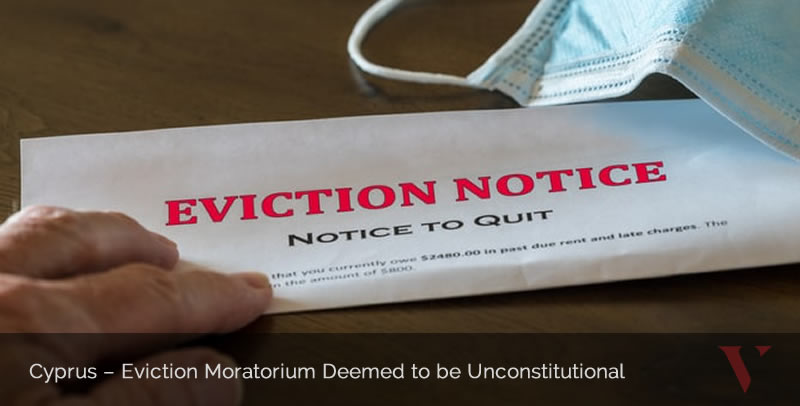 In its recent ruling issued on the 5th of October 2021, the Supreme Court ruled as unconstitutional the bill passed by the Cyprus Parliament extending the moratorium on tenant evictions, which was passed then in an effort to reduce the impact on social and economic consequences of the COVID-10 pandemic.

In its ruling, the Supreme Court pointed out that the Parliament did not have the right and power to amend the relevant legislation on evictions, since such decision interferes with the right to enter freely into any contract, such right being enshrined in Article 26 of the Cyprus Constitution. Furthermore, the Supreme Court ruled that the said bill violates the principle of separation of powers, as well as conflicts with the Article 30 of the Cyprus Constitution, that no person shall be denied access to the court assigned to him by or under the Constitution.

In its decision, the Supreme Court said that the automatic suspension of the procedure to issue decisions and orders for eviction at any stage, without hearing the other side and without a court decision as to whether such suspension is justified, constitutes interference with the courts’ authority and a violation of the separation of powers between the legislative branch and the judicial branch. Moreover, the Supreme Courts stated that, inter alia, the right to access to the court is not absolute and it could have limits, provided however that such limits do not restrict or diminish access in such a manner or extent that effectively destroys the core of the right itself.

In its concluding remarks, the Supreme Court explicitly emphasized that the bill, as it stood, imposed a suspension of any procedure for recovery of possession under article 11 (1) of Law 23/1983, regardless of its stage, meaning that it is prohibiting the continuation of existing/ pending court proceedings, as well as the issuance of court decisions and/or orders for the recovery of possession. In this way, the legislative power assumes and exercises powers

outside its sphere of competence, by the means that its controlling and interfering in judiciary’s independence, in violation of the principle of separation of powers.