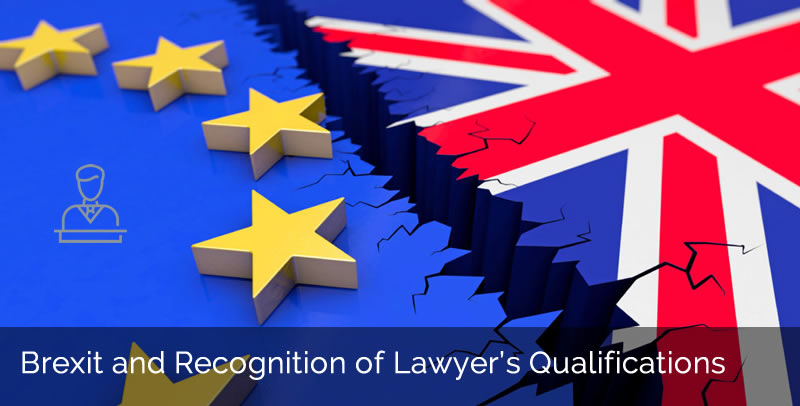 Brexit and Recognition of Lawyer’s Qualifications

As of 1 January 2021, the United Kingdom has lost all its rights and obligations as an EU Member State during the transitional period under the Exit Agreement. It will no longer benefit from unrestricted access to the EU single market and customs union, nor from EU policies and international agreements (including free trade agreements with other third countries).

The Council, acting unanimously in all 27 Member States, will have to adopt a decision approving the signing of the EU-UK Trade and Cooperation Agreement and its provisional application from 1 January 2021. Once this procedure is completed, the agreement can be formally signed. The European Parliament will then be invited to approve the agreement. As a final step on the part of the EU, the Council must adopt the decision to conclude the agreement.

Does the agreement provide for the recognition of professional qualifications?

When the United Kingdom was a member of the EU, and the EU single market, its nationals and EU-recognized nationals benefited from a simplified, in some cases automatic, status in other EU which allowed professionals such as doctors, nurses, dentists, pharmacists, veterinarians, lawyers, architects or engineers to provide services throughout the European Union, including the United Kingdom.

However, the Trade and Cooperation Agreement provides for a mechanism under which the EU and the United Kingdom may later agree, as appropriate for certain professions, on additional arrangements for the mutual recognition of certain professional qualifications.

Will EU lawyers still be able to provide legal services in the UK and vice versa?

The EU and its Member States, as well as the United Kingdom, will allow lawyers from the other Party to provide legal services specifically related to the practice of international law and the law of the country in which they have been licensed on the basis of their “professional title of country of origin”.

However, it should be noted that EU law is not considered to be international law, but rather the law of the Member State in which EU lawyers are established or have obtained their “professional title of country of origin”.