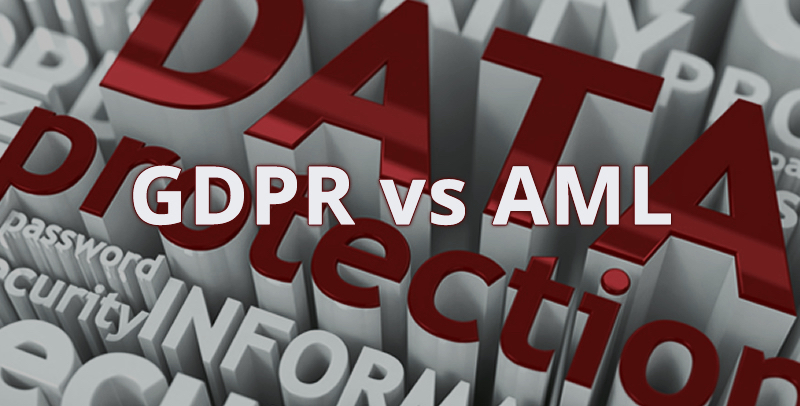 GDPR vs AML – When the Titans Clash

The key and most far reaching changes in recent years has undoubtedly been the introduction of the General Data Protection Regulation (GDPR), as well as the introduction, strengthening and expansion of rules and regulations relating to the prevention and suppression of money laundering and terrorist financing – commonly referred to as Anti Money Laundering laws and regulations or “AML”).

The General Data Protection Regulation (GDPR) is designed to protect the data privacy of EU citizens. Every company that legally processes the data of EU citizens, regardless of where that company is located, must comply with GDPR policies. The fines for non-compliance are indeed quite significant, as they can reach as high up to €20 million or up to 4% of the company’s annual sales (whichever is greater).

So Where Does the Clash Occur?

One of the main pillars of GDPR is the right of EU citizens to have their data erased from the data processor’s systems forever. By way of example, if an EU citizen, whose data you have legally collected as they were doing business with you, instructs you that they no longer wish for you to be retaining their data, you need to be in a position to erase all such data from your systems (including any backups, mailing lists, marketing lists, etc).

On the other side of the equation, AML regulations state that when you investigate suspicious activity, you must save and keep such data and transactions for five years or again be faced with fines due to non-compliance.

The question which a lot of clients raise is exactly this: which of the two sets of regulations do I follow so that I am in compliance with both and don’t get fined?

Fortunately, although it might not be immediately clear, GDPR has provided for such eventualities and has included language that protects both data controllers and data processors.

Although no Court Decision has been issued as of yet on this matter, relevant guidance can be obtained from recent decisions issued by the Office of the Commissioner of Data Protection:

For any further guidance regarding this procedure or if you require an initial consultation, please do not hesitate to contact our Law Firm at info@vrikislegal.com,  +357 22 251 777 or +357 25 261 777 or please visit our office in Nicosia or Limassol.