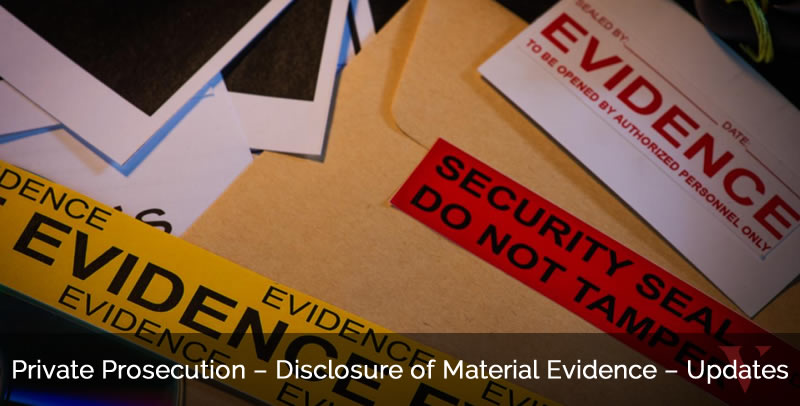 Update 1: On 17/02/2021, the Court of Appeal in Civ.App. 373/2019 overruled the decision of the Court of First Instance (Jurisdiction of Prerogative Writs) which rejected the application for leave to file an application for Certiorari cancelling the decision of the Court of First Instance rejecting the request for disclosure of material evidence and/or Prohibition prohibiting the further carrying-on of the proceedings and/or Mandamus ordering the private prosecutor to disclose the material evidence to the Defense. Part of the rationale was that the discrimination between accused that are prosecuted from public authorities and private prosecutors is not permissible and not in line with the fundamental principles aiming to safeguard the rights of every accused person.

Update 2: On 22/4.2021 Criminal Procedure Law was amended by Law 68(I)/2021 adding new Article 7A which effectively gives the right to every accused person in Private Prosecutions to have access to the evidence of the prosecution. New Article 7A, mentions inter alia the following:

7A .- (1) Notwithstanding the provisions of Article 7, the accused person in private criminal proceedings or his/her lawyer is entitled, upon a request in writing to the prosecutor, within twenty one (21) days from the date on which the request is made, to have access free of charge to all documents and / or evidence held in possession of the prosecutor, including a list of names of the prosecution witnesses and a signed written statement of each of the persons having a complaint, in which their testimony is recorded on all the facts of the case, as well as a summary of the testimony of any other prosecution witness in order to ensure the fairness of the proceedings and the preparation of the defence of the accused.

There are certain points that differ from ordinary prosecution proceedings, i.e. the witness summary of the testimony, but that to our understanding is due to the reasons mentioned above. A private prosecutor or any other person acting for the private prosecutor cannot investigate, interrogate or take a statement of a witness or of the person having the complaint, as this authority is only given to persons expressly stated in the law as “examiners” which is the police and some other authorities under certain laws. In essence, where in ordinary public prosecutions the Accused would have the chance to review the statements of the witnesses in advance and thus, have a chance to prepare his/her defence, this didn’t happen in private prosecutions partly because the private prosecutors didn’t have any authority to investigate, and thus produce such statements.

While it is clarified that access to all evidence includes copies of such evidence, as well as an obligation is introduced to the private prosecutor to give access to any new evidence intended to be used in the procedure, this right is still subject to some limitations. Time will show how Cyprus Courts will treat this Article however, this is undoubtedly an end to an otherwise grey area of Cyprus law.